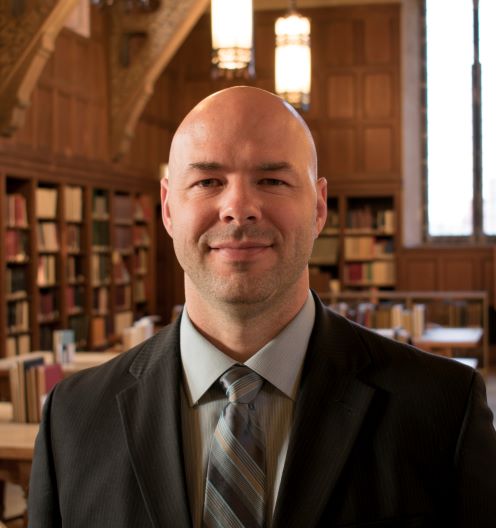 Who would have thought that a broken rock could simultaneously serve as a device to decode secret messages, a multinational marketing tool, an emblem of cultural engagement, a symbol of colonial repression, and an icon of cultural resistance? Yet, since the decipherment of Egyptian hieroglyphs in September of 1822 by Jean-François Champollion—exactly two hundred years ago—the Rosetta Stone has become a global sensation imbued with kaleidoscopic symbolism. Foy Scalf of the University of Chicago's Oriental Institute will share a retrospective look at the decipherment of Egyptian hieroglyphs over the last two centuries, including an overview of the Rosetta Stone, the contents of its ancient inscription, its role in unlocking the ancient Egyptian language, and the many meanings it has today.
REGISTER HERE for this Zoom program. A recording of the program will be made and placed on the library's YouTube channel a few days after the event.
About the presenter: Foy Scalf is an Egyptologist who studies the intersection of people, materials, texts, and beliefs in ancient Egypt. His recent books include the edited catalog Book of the Dead: Becoming God in Ancient Egypt, through which an international team of scholars presented cutting-edge research results on ancient Egyptian religious literature. In the 2021 volume The Archive of Thotsutmis, son of Panouphis: Early Ptolemaic Ostraca from Deirl el Bahari (O. Edgerton), Dr. Scalf and his co-authors investigated the administrative side of these mortuary practices through an archive of Demotic texts that documented how the ancient Egyptian funerary industry was organized. He is currently working on two catalogs of Book of the Dead manuscripts from the J. Paul Getty Museum and Williams College. He serves as the Head of Research Archives for the OI of the University of Chicago.
Want to receive the library's email newsletter? Brief-and-breezy GPL Weekly delivers library news--with handy program registration links--to your inbox every Monday morning.